The Old Town of Tallinn (that’s pronounced TAHL-linn) dates from medieval times, and it’s been lovingly restored, Disneyland-like, to look just like that, to the point that many businesses’ employees dress in period garb. Surprisingly, the effect is pleasant rather than cheesy. Being medieval is Tallinn’s brand. We stayed in a renovated studio—the building was 600 years old but the recently-remodeled apartment had a small personal sauna in the bathroom! AirBnB FTW.

Despite some rain, our free walking tour was terrific. (We enjoyed free donate-what-you-like walking tours in all three Baltic capitals.) There are spectacular views of the “lower city” (where the working folks lived and where the taverns were) from the “upper city” just outside the walls (where the nobles lived). Much of the city wall is either intact or reconstructed, with the original city gates. The sense of being in a medieval walled city is authentic.

After the tour we had lunch with some of the other tour-goers, including Roberto (Colombia), Miguel Ángel (Mexico, but currently living in UK), Soh (South Korea, at right), and ???. A great tip we got from Roberto and Miguel Ángel, who had been working their way north from Poland, was to go to a bar called Ala in Riga…more on that later. We were particularly impressed by Soh, who seemed late 20something or early 30something and had traveled solo on the Trans-Siberian Railroad over a 3-week period as part of spending several weeks traveling.

In the evening, we went to a bar just outside the city wall that Lonely Planet had identified as a locals bar. True to form, no one there including the bartender spoke English; it attracted an older crowd (the bars within the walls attract a younger and more touristy crowd); and two of the customers had appointed themselves the concertina player and chanteuse/danseuse. It doesn’t get more authentic, as the short video clip suggests. 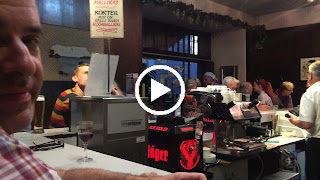 The guy next to me taught me to say a quo vadis in Estonian, which I’ve since forgotten, and when I asked him for advice on trying a “local specialty”, he suggested Milli-millikas. This turns out to be a vile concoction of cheap tequila, Jaegermeister, and quite a bit of Tabasco sauce, consumed as a shot. Don’t try it. But the bartender also suggested trying Vana Tallinn (“old Tallinn”), an herbal digestive liqueur made in Tallinn.  That we liked a lot, and ultimately brought home a bottle.

The next day took us to the very moving Museum of the Occupation. The Baltics have actually been occupied at one time or another by Sweden, Poland, Germany, Russia, Germany again, and the USSR, before gaining their independence in 1991 after the dissolution of the USSR. As the museum points out, unlike the Jewish Holocaust, whose story was amply documented immediately after the Allies liberated Europe, the Baltic citizens who were deported to Siberia during the Soviet occupation were later forbidden under penalty of death from writing about their experiences or even discussing them with others, so the details of the Baltic tragedy are far less known to outsiders. But their occupation was no less horrible, and the atrocities visited on them by the Soviets no less heinous than those visited by the Nazis upon the Jews, if perhaps not at the same scale. During the post-WWII occupation, the Baltic countries lost fully a third of their population via deportation and execution.

Given we had had only had a day and a half in Tallinn, we decided to modify our original plan. Instead of spending a day in the university town of Tartu and visiting Sigulda Castle, we decided to focus on the Baltic capitals. A bit of investigation quickly revealed that the trains here don’t go anywhere useful—local service only, for the most part—and that buses are the way to get around. So we booked a bus ticket for the following afternoon to Riga, the Latvian capital, about four hours’ drive away.