Erol, our private guide, came to meet us at 9am. The first stop was the site of the former Roman hippodrome. When Constantine beat out his rival to become the sole ruler of the Roman Empire (this was before Rome fell in 476), as was traditional for the Romans, he brought shit from the empire to adorn his new capital city, which he renamed from Byzantium to Constantinople. When the Turks toppled Constantinople, the hippodrome fell into disrepair because the Turks weren’t into horse racing, but the open plaza remains, as do the monuments that were in the center median of the elliptical hippodrome track: two Egyptian obelisks and a bronze serpentine column the Romans brought here from temple of Apollo at Delphi (sweet irony, since it had been moved to Delphi from this region when the Greeks conquered the Persians). The obelisk that looks better-preserved and is one solid piece (traditional for Egyptian obelisks) was taken by the Romans from the Temple of Karnak in Luxor, Egypt, which is kind of cool because it is one of a twin pair and I have seen its twin (though that was back in 1998). 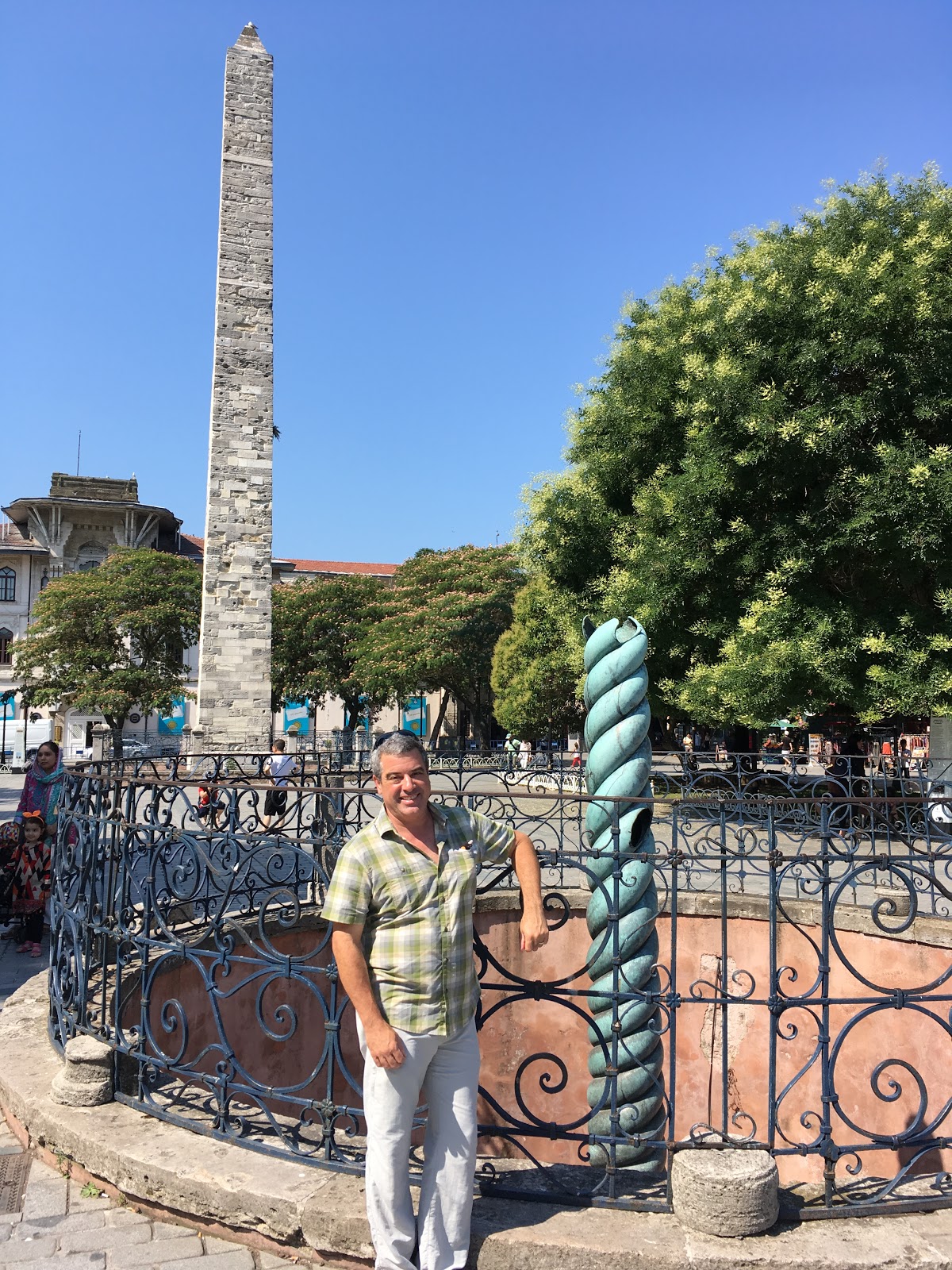 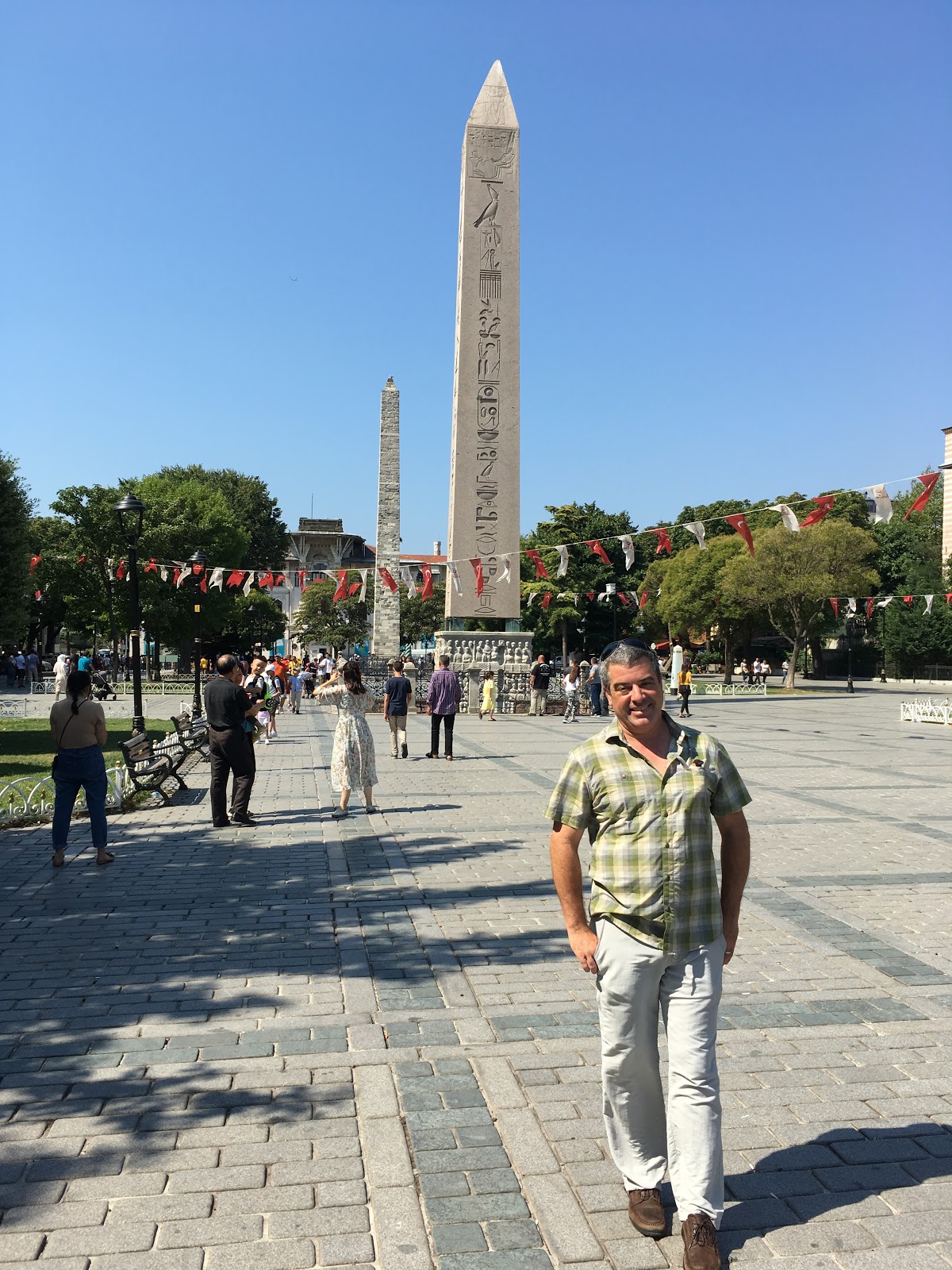 The next two stops were the Blue Mosque and Hagia Sophia. There are photos of these all over the Internet, plus the Blue Mosque is undergoing extensive restoration so what you could see inside was limited, but it was impressive for what it was. But of course the Hagia Sophia (“Holy Wisdom”—an innocuous impersonal name that saved it from being renamed by Muslims later) is what people come here to see. Built in 537 as a Christian church by Justinian (well, really slaves did the work, Justinian just commanded it) of brick coated with plaster, it was actually the third church on this site. The second was destroyed by taxation riots (“Lock her up! Lock her up!”) but fragments remain, giving a glimpse into a transitional period around the time it became legal to be openly Christian in the Roman Empire and before a new architectural language had developed for decorating Christian buildings; the motifs on the ruins include some halfhearted crosses, but a lot of the imagery has more in common with earlier pagan temples.

The Hagia Sophia was originally largely unadorned because it was built during the iconoclastic period. This was a case of religious practice (Islam forbids images of deities or prophets in its places of worship) spilling over too enthusiastically into secular life. The prohibitions were lifted around the 10th century, when amazing mosaics were installed; these were subsequently plastered over (but not defaced) by the Turks in the 16th c. when it became a mosque. Some are in better shape than others, but a notable aspect of the artwork is its humanistic appearance, which presaged the Renaissance and was a stark departure from medieval art. 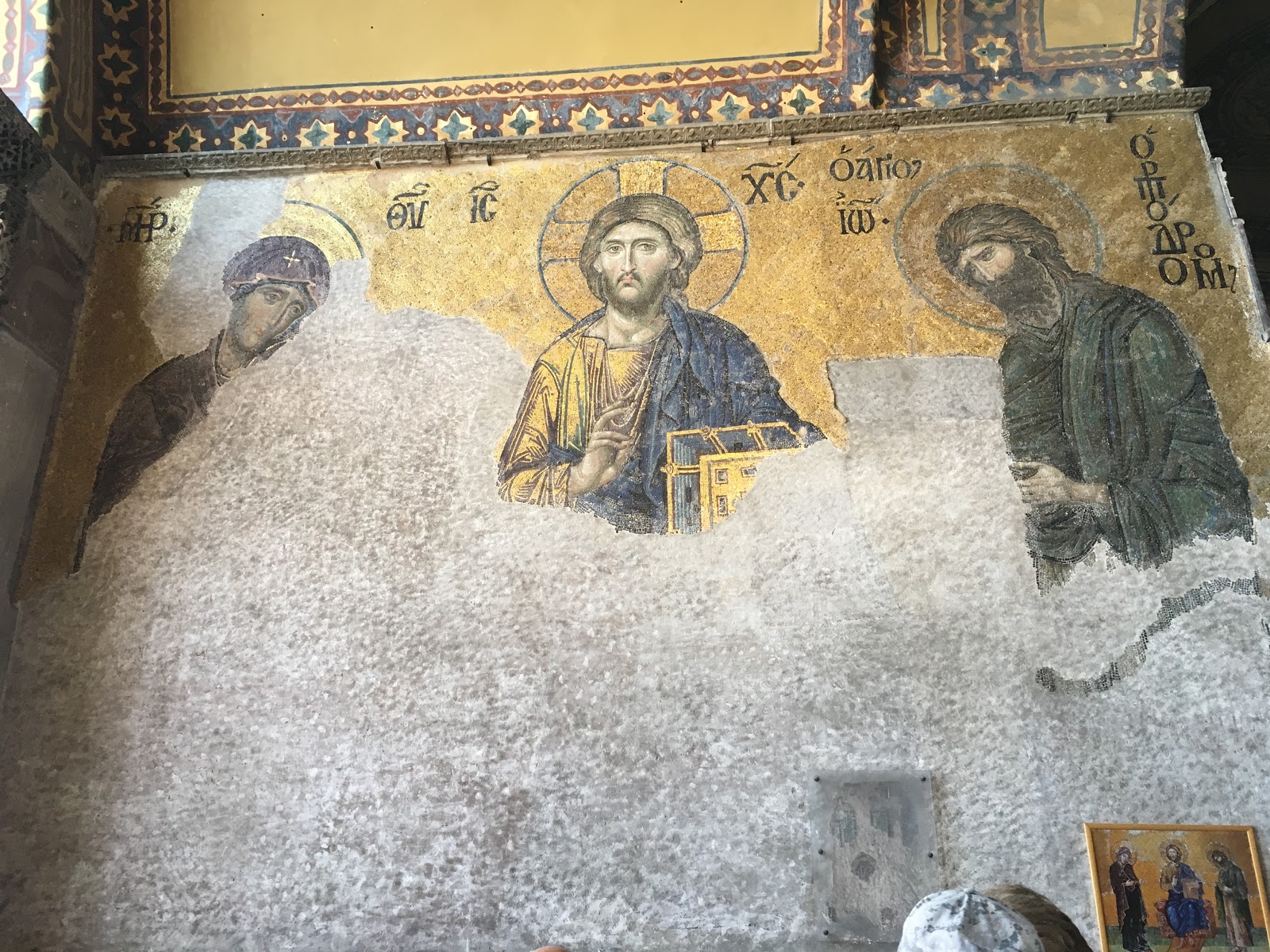 At the time HS was built, it was the largest enclosed space under a dome in the world. (It’s now the fourth largest, after St. Peter’s in Rome, St. Paul’s in London, and the Seville Cathedral. It occurs to me I’ve visited all those places in order of descending size.)

Lunch was in a small knot of alleys in Sultanahmet that have a bunch of restaurants where locals eat, surprisingly for an otherwise touristy area. Turkish food is awesome, and I was not disappointed by my entrée of Iskender in casserole—basically gyro meat sliced and marinated in a really amazing sauce, and the whole thing baked with vegetables and topped with sour cream or something. Whatever it was, it was amazing. 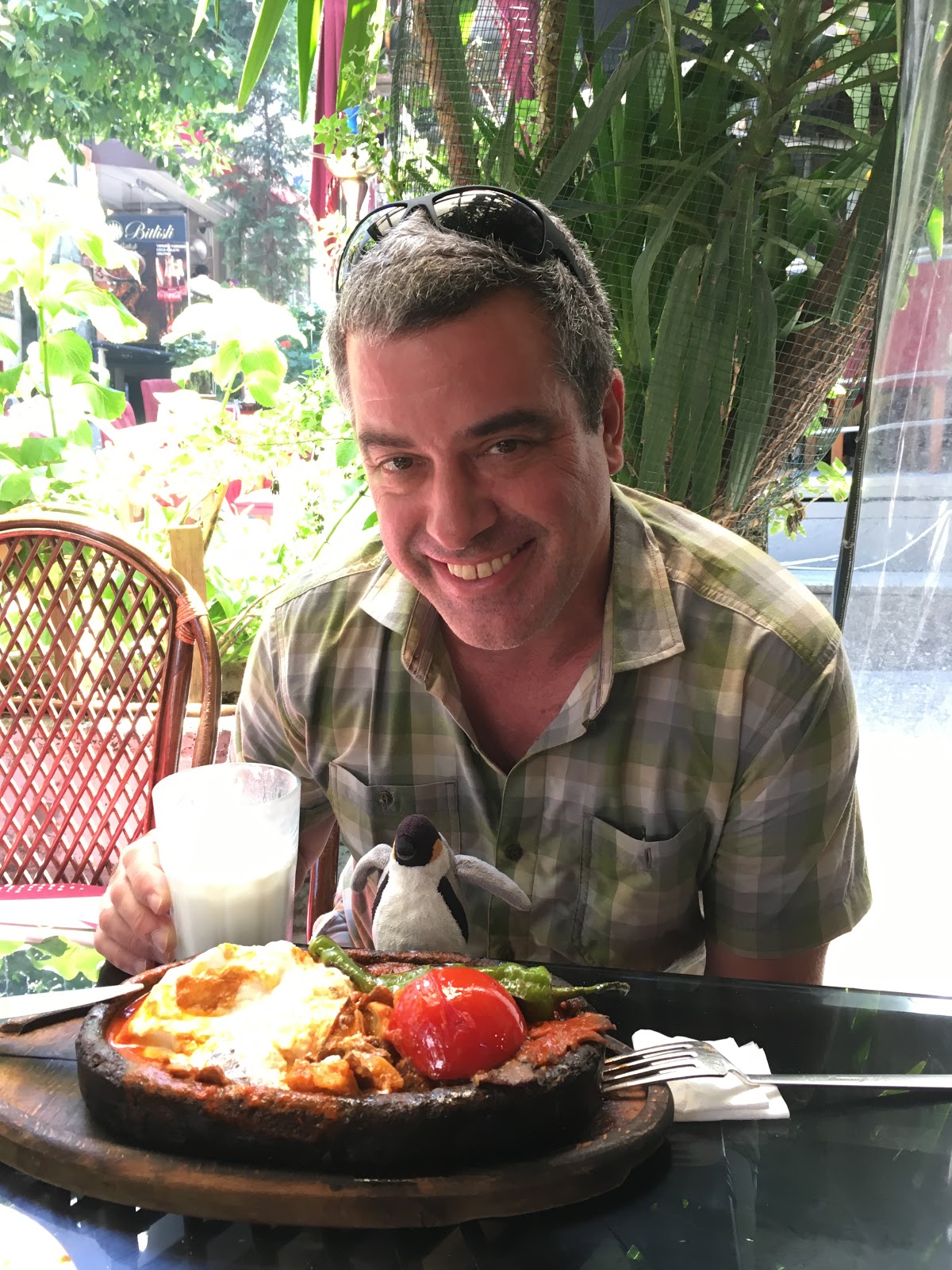 Almost none of the non-tourist restaurants serve beer or wine. Turkey isn’t a teetotaling culture like Morocco, but it is definitely partitioned. There are bars and taverns where locals go to consume beer, wine, and rakı, a national anise-flavored spirit that I’ve grown to like and am enjoying right now as I write this. But in most restaurants, it’s juice, soft drinks, and of course tea in those tiny cups.

Over lunch I got to learn some about Turkish politics, as Erol was quite forthcoming. As he pointed out, Istanbul has way more mosques than it needs for its population. People don’t mind because the sound of so many live muezzin calls makes them feel good about their religion. But the muezzins and the imams are paid public servants—as Americans we often take separation of church and state for granted, but in Turkey, the Department of Religious Affairs pays these folks a salary from public dollars. And every Friday, the imams are given a message from the Department (whose head is appointed by the President) to convey to the faithful. As public servants, they’d basically lose their jobs if they refused to do this. And these days, the messages are propaganda from Erdogan against the ruling party. So basically the mosques provide a taxpayer-funded mouthpiece controlled unilaterally by the President (who, unlike in the US, is basically not answerable to anyone) whose sprawling network of communications is run by employees funded at public expense. Hmmm.

We talked about Trump, of course, and Erol said he’d seen TV footage in which Trump’s limo procession was driving down some US street or other, and there were protesters shouting obscenities at the passing motorcade and holding up raunchy signs, “and the police just did nothing!” In Turkey, he said, the police would have been all over that—most countries don’t have anything as strong as what we think of as freedom of speech. So all is perhaps not lost.

After lunch was a trip through the spice market, locally called the Misir market. Misir is the Turkish word for Egypt, and the market got its name because many of the exotic products originally available there were shipped through Egypt. (Interestingly, misir also means corn. New World foods coming to Europe and continuing on to Asia also came through here, and the name of this particular food became associated with the name of the market itself. Most other New World agriculture, such as tomatoes and potatoes, are named in Turkish via loan words.) At my insistence, Armando stopped at the best Turkish Delight confectioner in the market, and because the proprietor loved me, we got some tasty samples of this confection that is made in dozens of varieties. 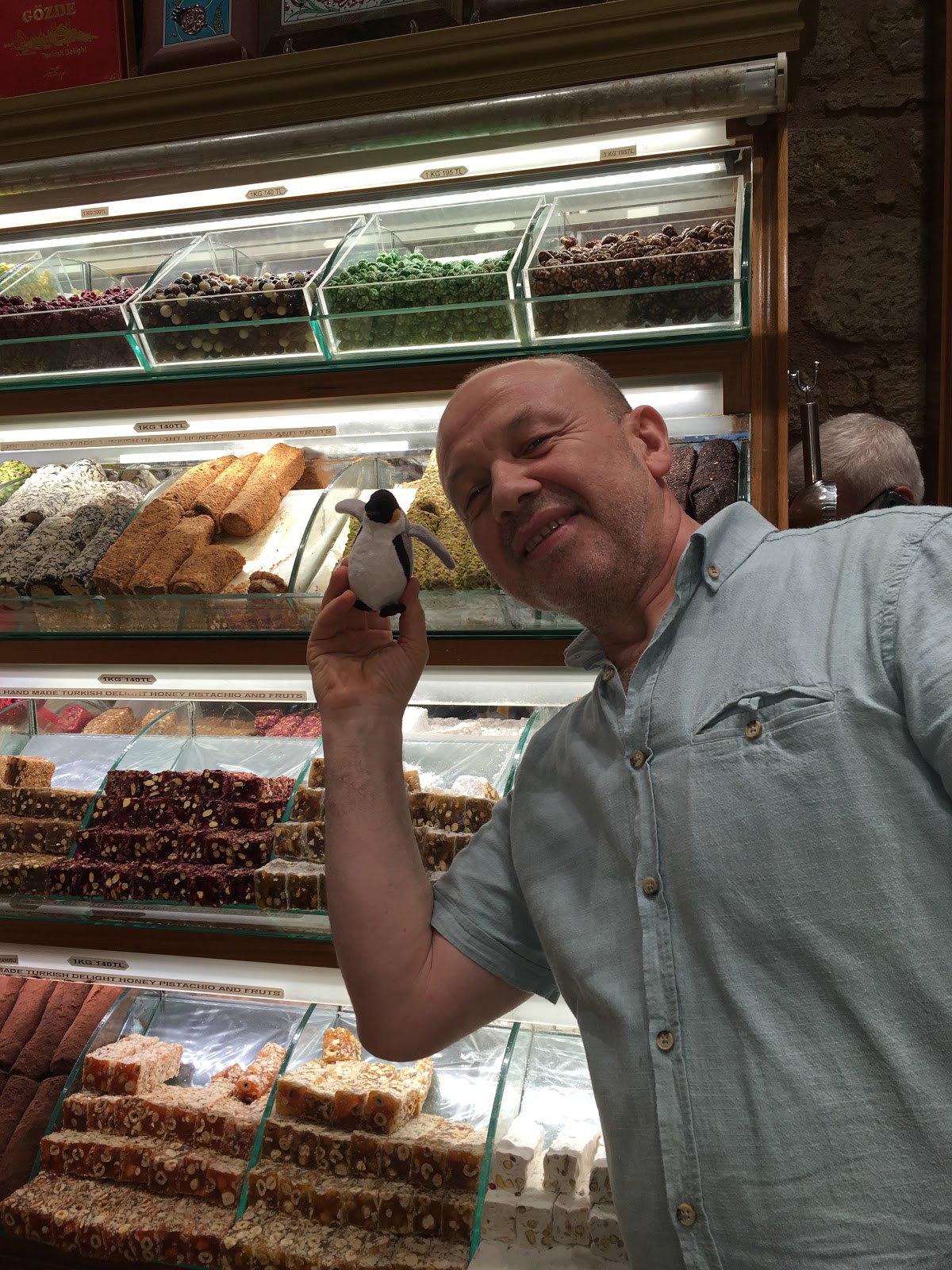 Next it was a walk across the Galata Bridge (all the way across, this time) to the underground funicular up Galata Hill. Our first quick stop, at Armando’s request, was the Hotel Pera Palace. It was built in 1892 to give Orient Express passengers a nice place to stay, since there were no hotels in Istanbul at that time that offered European service standards. Unlike Sirkeci Station, this hotel still looks every bit the part; Agatha Christie allegedly stayed here while writing her famous novel, and Hemingway was apparently a regular visitor too, along with Rita Hayworth and some other Hollywood nobility. 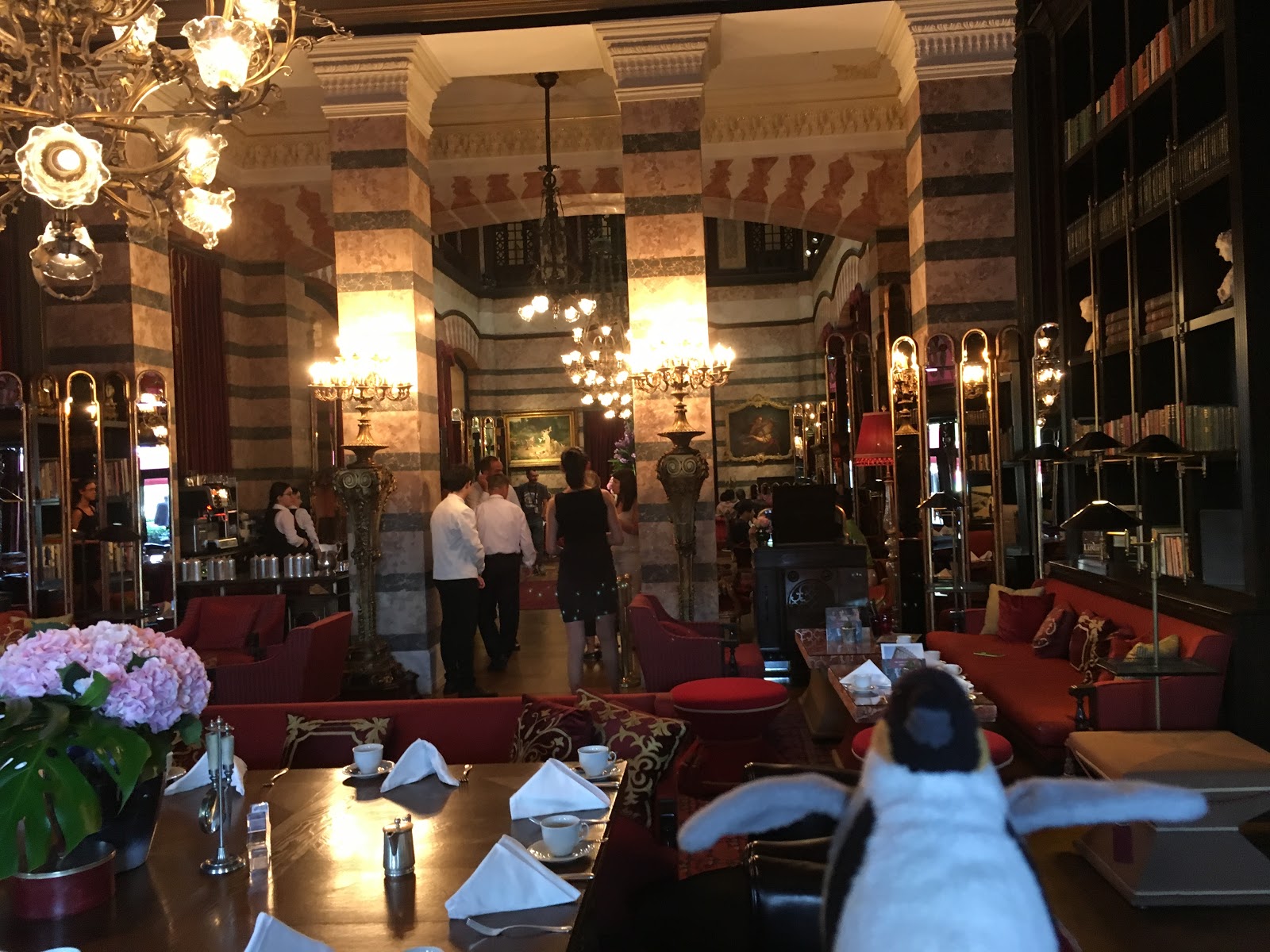 The queue for the Galata Tower was too long, so we did a nice walk around Beyoglu (the shopping area around Galata) instead before heading back to the historical center, where we parted ways with Erol.

We decided to use the rest of the afternoon to cruise around different neighborhoods. Erol had recommended Kadiköy, a 20 minute ferry ride away on the Asian side of the Bosphorus, as an up-and-coming cultural neighborhood, so we went there. It was nice enough, but the highlights were really the ferry ride and the long walk along the waterfront in Kadiköy. The photo is hazy but you can see the first Bosphorus Bridge behind me; on the right is Asia, on the left is Europe (north/east shore of the Golden Horn), and where your right shoulder is when you’re looking at this picture is the historic center (south/west shore of the Golden Horn). 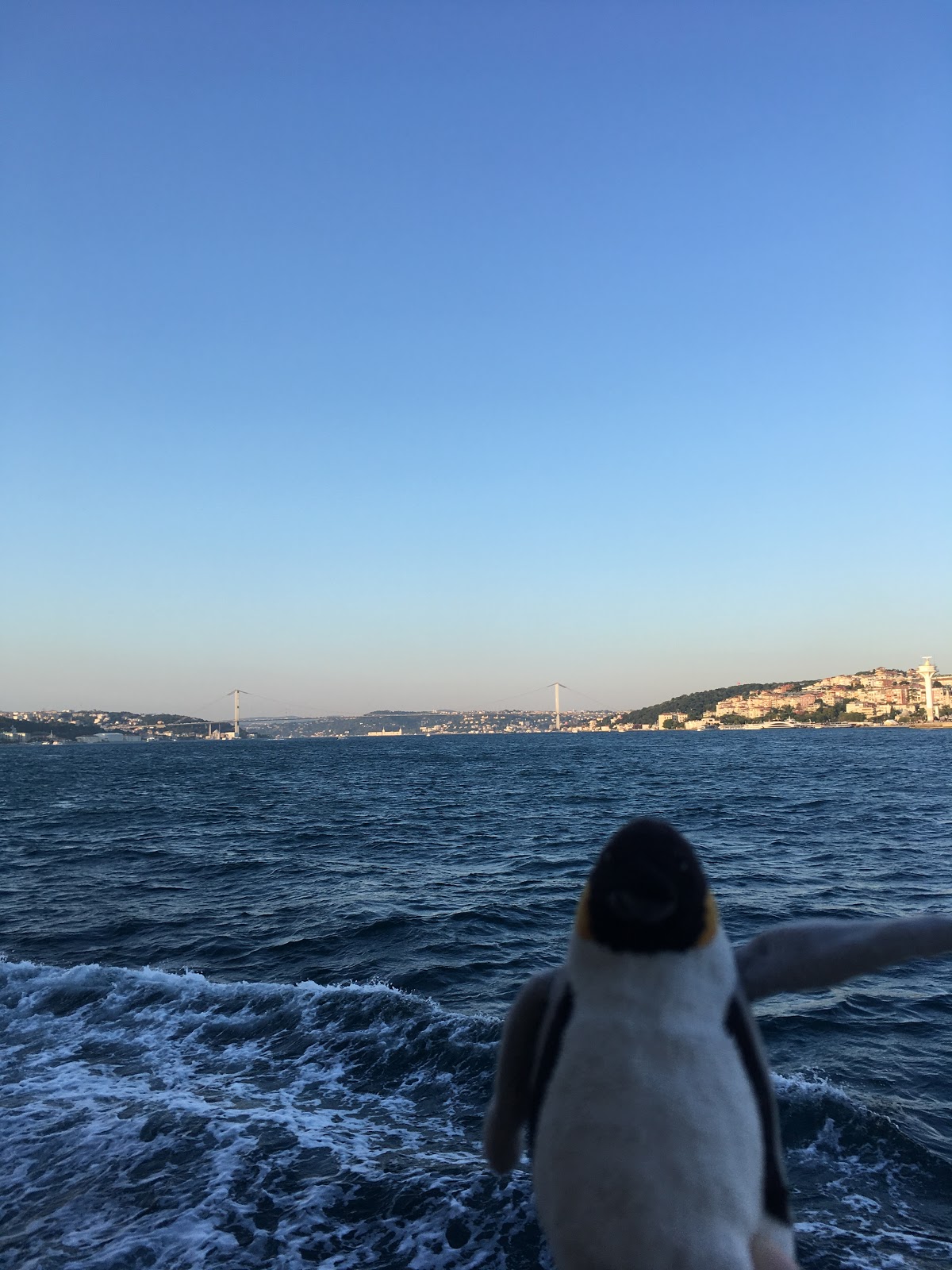 We got on the wrong ferry when trying to return homeward (Armando thought “Besiktas” meant “departure,” but it was actually the name of a neighborhood…the fool), though easily rectified by a bus ride thanks to our handy Istanbul Kart, which Armando is adding to his collection “transit cards of the world.” (Honestly, who collects that?) Anyway, by bus we managed to get back to Galata easily enough, and as there’s no shortage of rooftop bars and cafés there, we chose one more or less at random that claimed to offer a good view of the city, which was true. 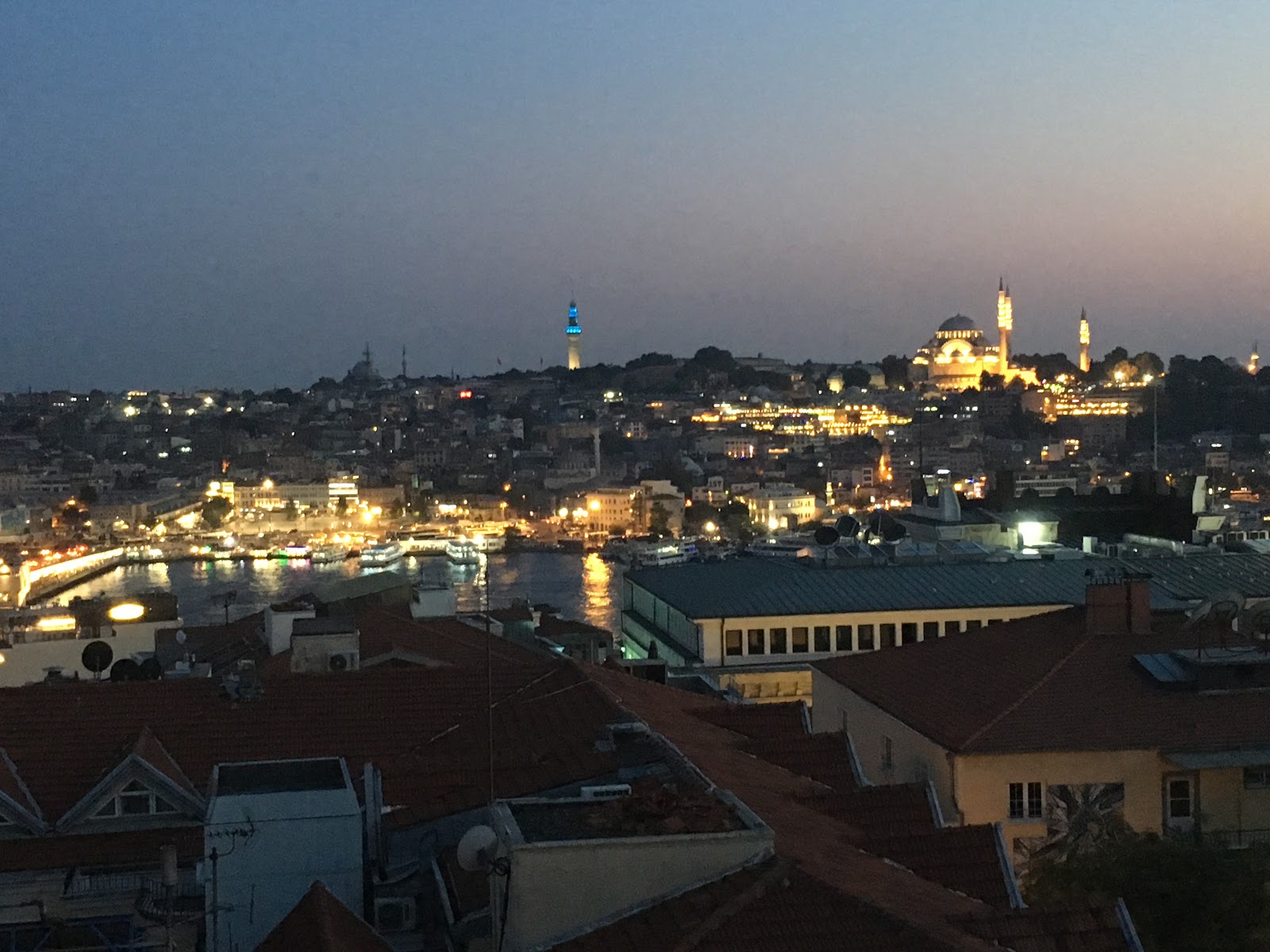 A pretty full day overall—we rode trams, a funicular, two old-time streetcars, and two ferries. The only thing we didn’t ride was the subway! But there’ll be time for that tomorrow, after seeing Topkapı Palace and maybe some museums!